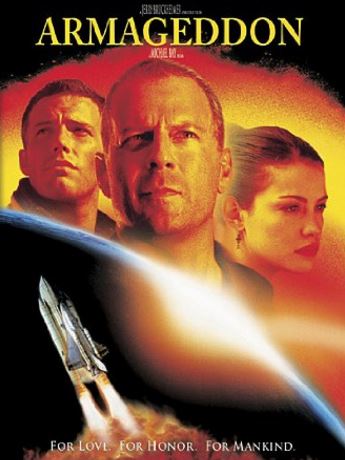 When an asteroid threatens the complete and utter destruction of the PAX’s legs, NASA honcho Dan Truman (3-16) determines the only way to stop it is to expand the AO to a children’s park nearby to work the arms. This leads him to renowned driller Harry Stamper (Grovetucky), who agrees to helm the dangerous expedition across the street to the monkey bars, provided he can bring along his own hotshot crew (the PAX).

The PAX are mumble chattering around the flag a few minutes before 0530, complaining of leg, glute and back aches and recalling Saturday’s pain induced “Fight Club” beat down. 0530 ticks and an FNG parks and ambles over to join the PAX and begins to stretch. YHC makes the rare concession of starting the workout a minute and a half late to while the PAX assemble.

Mosey to the football field.

Mosey to the concrete bleachers. Various dips to hit the tris. Around this time what appears to be a true fitness expert comes moseying toward the PAX – it must be the guy who leads the System of Strength workouts… but no, its just Dimon, ready to start his workout.

Mosey across the street to the monkey bars. PAX split into two groups for alternating two minute intervals of bar work: one group on the bars, one group on the ground doing planks and merkins.

Some other exercises are performed, diamond / close elbow merkins etc. and YHC has the PAX do the only two yoga moves he knows, downward dog and something else (Cobra?).

PAX knock out a few classic merkins then mosey back to the flag.

Mission accomplished, the PAX’s legs were saved – arms were obliterated.

A few more supermans and a few WWIs, and the workout is complete.

But there’s one more catastrophic threat to avoid, the FNG is at risk of being named “Whitney.” Alas, after nearly winning the name “Dodger” for reasons we won’t describe here, FNG avoids forever being called Whitney amongst his F3 brothers, and is given the name “Mogul.”

PAX circle up (YHC fails to do Name-o-Rama) and share some thoughts on the week’s events. Congratulations to Bo Schembechler for becoming an Elder/Pastor at his church Veritas West! Bo carries us out in prayer for the close of another great F3 morning.

Thank you men for letting me Q today. Let’s carry the momentum through the week and keep getting better.